WHY YOU SHOULD USE LIGHTNING RODS?

Lightning is an electrical discharge that keeps the increased electricity potential between earth and the clouds in balance. Since lightning is the contact of lightning bolt with earth, we first need to understand how lightning bolt is formed. Lightning bolt occurs due to charging of clouds. Well, the response to the question as to why clouds get charges could be that air is not a good conductor. Even though lightning strikes and interactions can be explained, humans’ knowledge on how clouds get charged is not at a sufficient level. Throughout history lots of theories have been put forward on this subject. One of these theories is Simpson and Lomonosow’s theory. According to this theory, charges in the clouds are formed with the assistance of air flow. 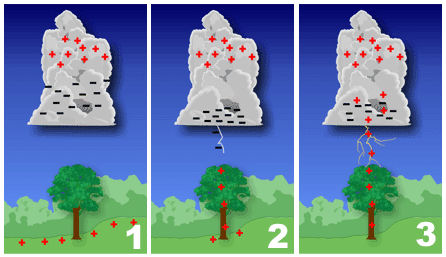 As factors such as storm, wind etc. increases, the negative charging in the lower part of the cloud increases and as a result the positive charge in places on earth the cloud impacts also increases. Thus, the potential difference that keeps increasing between the clouds and earth, cuts through the air and causes a discharge between the earth and the clouds through a conductor duct in the form of cracks like the branches of a tree. If this discharge and interaction occurs between clouds, it is called a lightning bolt. However, if this discharge occurs between the earth and clouds, it is called a lighting strike.

WAYS TO BE PROTECTED FROM LIGHTNING STRIKES:

The probability of a person to be hit by lightning is small however not impossible. Therefore, extreme care should be taken during rainy weather. As a result of research done, it has been determined that prior to a lightning strike in an area, a sound similar to buzzing gets heard, tingling occurs on the skin and the hair stands up. If such a situation occurs, that area should be left immediately.

Measures that could be taken are as follows;
In order to be protected from lightning strikes, tools can be used on house and building roofs which are called lightning rods and which conduct electricity to the earth.
In case of being subjected to weather with precipitation, measure that could be taken individually is to find an area with the top closed and wait until the precipitation is over.

You definitely need to stay away from trees, electricity posts, pointed places and water puddles.

If you cannot find an enclosed area, what you need to do is to move away sufficiently from other people and crouch down and keep your feet together and bend your head down forward as much as much as possible. If you are carrying an umbrella, pointed or metal objects it means you are carrying danger with you. Therefore, even if you have an umbrella with you, instead of trying to get home, closing the umbrella and finding an area with the top closed is the best choice.

The safest places against the probability of lightning strikes are cars and buildings. Especially cars can conduct electricity from the wet tires to the earth. You should not fall for the opinion that “lightning does not strike the same place twice” because lightning has been observed to strike the Empire State Building in New York City fifteen times within fifteen minutes.

Lightning rod is a tool which aims to transfer the electricity charge in the air to the earth. The light display formed as a result of the friction and collision of two clouds or discharge of electrons among themselves is called lightning bolt. In order for the lightning bolts to be converted to lightning strikes, the clouds need to be located close and parallel to the earth and engage in electron exchange. The path the electrons follow after this gets transformed to a fireball and lightning strike occurs. In order to be protected from lighting strikes, equipment called lightning rods are placed in buildings and houses where they are closest to the sky. Simply, these are iron bars which are connected to the earth. Due to grounding, the lightning which strikes the bar gets diffused.